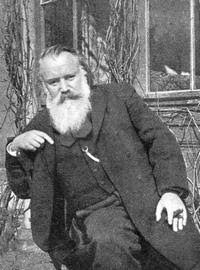 What a scoop for the Two Moors Festival. This plucky, determined organisation way out west between Exmoor and Dartmoor has had its share of rather impactful incidents. Back in 2007 they bought a Bosendorfer, for which they'd bust many guts to raise funds, and someone dropped it during delivery (no, it wasn't OK). Now, though, they've found something altogether more resilient, and it's by Brahms.

It is, to be precise, an arrangement for piano duet from 1864 by the great Johannes of his own Piano Concerto No.1. It's been sitting undiscovered in a California library since World War II. Here's what happened, according to the festival:

Brahms sends the score to his publisher, Rieter-Biedermann, and it somehow moves thence to the hands of Heinrich Schenker, the legendary musical analyst. After his death in 1935, his wife has the manuscript. But then Mrs Schenker tragically falls prey to the Nazis and is deported to a concentration camp, which she does not survive. Beforehand, she manages to give her husband's substantial collection to one of his pupils, Oswald Jonas, who spirits its contents out of Germany in a trunk. In America, Jonas bequeaths the Schenker collection to the University of California, Riverside. And finally, someone finds the duet there...

Ashley Wass and Christoph Berner are the two lucky pianists who will give the UK premiere in St Andrew's Church, Ashburton, on 13 October, with a script telling its tale written by Sarah Adie and narrated by Ian Price. The pianists will be playing on the festival's replacement Bosendorfer. The festival has 30 concerts this year and its theme, appropriately enough, is Arrangements and Transcriptions.