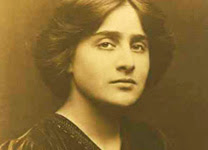 It's wonderful when they name a day after your musical heroine and make it an annual event. Today at the National Gallery it is Myra Hess Day, in tribute to the great pianist who, with the composer Howard Ferguson, started the now legendary series of lunchtime concerts there during the Blitz.

Three concerts are held during the course of the day in the same space that the musicians used in the 1940s - though now the paintings, which were removed somewhere safe at the time, are there too. The concerts are devised by Piers Lane, who's a sort of grand-pupil of Dame Myra via one of his mentors, the late Yonty Solomon. More about the history of the wartime series and its guiding lights on the National Gallery site, here.

Today kicks off at lunchtime with the Ionian Singers conducted by Timothy Salter in a programme of English music for choir. Afternoon brings a performance of Admission: One Shilling, by Nigel Hess (great-nephew) in which actress Patricia Routledge and pianist Piers Lane tell the story of the gallery concerts in Dame Myra's words and lots of music; and finally this evening Piers is joined by Tasmin Little (violin), Andrew Tortise (tenor), Fibonacci Sequence and the Menuhin School Orchestra to perform some Ferguson alongside Bach, Schubert and Mahler, plus a world premiere from composer Benjamin Wallfisch.

Afternoon and evening are sold out, but I think you can still get in at lunchtime.

Listen to Dame Myra playing her famous transcription of Bach's 'Jesu, Joy of Man's Desiring', plus a spot of Scarlatti...