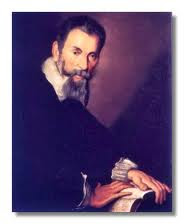 An extraordinary new light was cast upon the late works of Claudio Monteverdi (left) last night, when the Amsterdam University scholar Dr Pieter van der Oeugewalt revealed at last the startling result of secret research work he has been undertaking for the past five years.

The academic has issued a statement as follows:

"Monteverdi has long been regarded as the founding father of modern music. I believe that my discovery will prove that he was precisely such, yet in a more pervasive manner than we had hitherto imagined.

"Studying his opera L'Incoronazione di Poppea of 1642-3, I became fascinated by the presence of a recurring figure, a simple pattern consisting of a falling fourth followed by a one-tone dip below and return to this note. A close examination of the libretto reveals that this theme - as simple, skeletal and strong as any motif by Wagner - is associated on every recurrence with Poppea's greed and unstoppable ambition. Having checked and double-checked this association, I find it to be consistent and unfailingly so. Monteverdi's music sounds as modern today as it must have on the day it was written: this composer would spare no experiment in his determination to reveal through music all the secret depths of the human heart. There is no conceivable reason why he should not have thought of developing a means to associate a musical motif with one of the philosophical themes that drives the opera's action. It appears that we could now say, with 99 per cent certainty, that Monteverdi was also the father of what we term the leitmotif.

"I have spent years researching in the great libraries of the Gonzaga Palace in Mantua and in the Basilica San Marco of Venice. In November 2010, a letter came to light in the most extraordinary manner. Restoration work in the library at Venice, aimed at protecting this valuable collection from the likely rise of sea level in the years ahead, revealed a secret cubby-hole high in the wall in which several priceless documents had been stored to protect them from floodwater, possibly as long ago as the 18th century. Among these documents was one in a familiar hand and bearing unmistakeable content: a letter written by Monteverdi himself that has remained unread ever since its sequestering therein. Regrettably the date and addressee are not present, and where they should have been the paper bears what appears to be the marks of teeth belonging to a small rodent. But having authenticated the watermark and signature, and dated the document as 1643, I am pleased to offer my translation of its contents.


"My opera is done, and my life's work. I do feel my passion spent, my intellect drained of energy, yet sated also with the satisfaction of bringing to the sensibilities of my fellow man the vision that lay within me, calling for release: the message that love must triumph and even over death itself. To such an end I have implanted in this opera a new idea that doth unite the message with the music in a manner ne'er before attempted. Th'association hence between the notion of the theme and the theme itself shall not be divided. It is not an invention to boast thereof, yet I do believe it shall melt into the world of musical composition as if imperceptible and if applied with the power of which I do feel it capable, one day it may come to dominate the conception of many great men of the theatre. Others may have interfered with Poppea, adding or subtracting or otherwise mathematically manipulating its content to their own ends for the expedience of flamboyant performance. Nevertheless at heart the opera remaineth mine own, and above all this introduction of a quality that is novelty yet not mere novelty, seeming simplicity yet nothing simple. I commend my opera to thee and sign my name: