In case you missed #conductormovies yesterday...

Think classical music and its admirers are a rarified world, out of touch with popular culture? Think again! Though maybe we do have odd ways of letting off steam...

The Twitterverse went bananas yesterday playing #conductormovies. It was all the fault of @tommyrpearson who started it with one inspired tweet carrying the fatal hashtag: Herbert von Carry On. I was out doing interviews and got back to discover my twitterfeed full of stuff like The Curious Case of Benjamin Britten, Get Solti, Dudamel, Where's My Car? (which turned up about 100 times)... you get the idea. My own contributions were somewhat late in the game but I can offer When Harry Met Solti, The Fischer King, Fanny and Alexander Gibson, and Alex Prior Doesn't Live Here Any More. You can find the rest by going on to Twitter and searching the hashtag #conductormovies...

Meanwhile The New Classical 963FM, a Canadian radio station based in Toronto, and with considerable expertise in Photoshop, took things a stage further and produced the posters. Here's the link. And here's our LPO favourite: 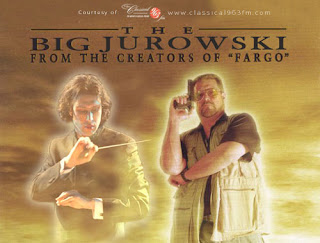 Back to soberer matters in a minute.... and apologies to New Classical 963FM for mistakenly identifying it as American this morning, which unfortunately is what comes of blogging before one's had one's second cup of coffee.
Posted by Jessica at 8:01 am