What's in the party bag?

It was time for an away-day by a north London canal yesterday as we were treated to lunch and the annual BBC Music Magazine Awards ceremony at Kings Place. The music industry was in a remarkably good mood, all things considered, and there were some great prizes to celebrate. Record of the Year went to Prokofiev's Romeo and Juliet on LSO Live, with the doughty band headed by Big Valery. Not that he was there - but subleader and chairman Lennox McKenzie had a good story about how VG phoned him five minutes before they were due onstage in Vilnius, and said "I'm here..." "Where?" "Look up..." And over went an incoming plane...

The person who was there to present them with the award, though, was Prokofiev's grandson, "Nonclassical" musician Gabriel Prokofiev. Something about his face is... a chip off the old block. Just look at Grandpa.... It was a really nice thing to do and made everyone very happy. 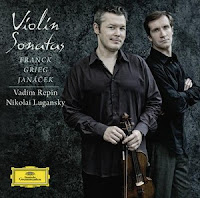 It was a good day for "best of British" admirers, with wins for a disc of David Matthews's symphonies, Purcell's The Fairy Queen from Glyndebourne on DVD, and so forth. But Russians other than Prokofiev were also well represented: Alexander Melnikov took the instrumental award for his Shostakovich Preludes and Fugues, and the chamber music award went to violinist Vadim Repin and pianist Nikolai Lugansky for their disc of Franck and co (left) - the boys themselves couldn't make it to Kings Cross, but sent in a wonderful thank-you video in which accents and aspects alike were absolutely worthy of Creature Comforts. The France-based label Harmonia Mundi scooped no fewer than three awards. I was sitting next to them and by the end we had to be careful not to kick the glassware. Felicitations, mes amis - vraiment un good haul and jolly well deserved.


You can see the full list of winners and watch the awards ceremony online by clicking here.

Now, dear reader, when you attend an awards ceremony, you get a party bag when you leave. So what's in the BBC Music Mag Awards goody trawl? The magazine, naturellement- in which you can read, among other things, my Composer of the Month article about Dvorak. Next, a couple of the discs - not sure if we all got the same ones, but in my bag were the Bach Motets conducted by Masaki Suzuki and the debut disc prize CD (which I've heard, reviewed elsewhere and gave 3 stars out of 5). Next: a glossy copy of BBC Gardens Illustrated, a bag of Kettle Chips, a pocket-sized bar of Green & Black's white chocolate (...all gone!) and a packet of grow-your-own tomato seeds. I'm sure there's a metaphor in the tomato seeds. If I find it, I'll let you know.

Huge thanks to Olly Condy and his brilliant team for a lovely day, and all best wishes to Daniel Jaffe, the magazine's erstwhile reviews editor, who is leaving now to write a big biography of Gustav Holst.
Posted by Jessica at 9:08 am