A lost concerto from Hungary, 1942: world premiere ahead

Barnabas Kelemen, the brilliant young violinist from Budapest, wrote to me recently with an astonishing story. On 2 May at Carnegie Hall, New York, he is giving the world premiere of a violin concerto by the Hungarian composer Mihaly Nádor, who died in the Holocaust in 1944. It is part of a powerful programme from the American Symphony Orchestra under the conductor Leon Botstein: entitled 'Hungary Torn', it features world and US premieres of several works by Hungarian composers, including the US premiere of Dohnányi's Szeged Mass.

The Nádor Concerto dates from two years before its composer's tragic death. I asked Barnabas to tell us more about it... 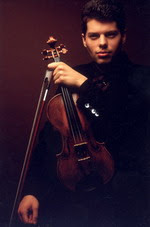 JD: Barnabas, how did the Violin Concerto by Mihaly Nádor come to light? And how did you come to be giving its world premiere?

BK: I got a phone call from my dear friend, the viola player Peter Barsony, who said that after years of research he had found several interesting pieces from Hungarian composers who suffered under the regimes of the first part of the 20th century. One of the most interesting was the Violin Concerto by Mihály Nádor, who died in the Holocaust in 1944 and finished his concerto in 1942. The manuscript was found in the Hungarian National Széchenyi Music Library. Leon Botstein, the concert's conductor, is always interested in this kind of repertoire, finding interesting music that hasn't been played, but is really worth learning. And they asked me would I be interested...? And I very much was and I'm just more and more enthusiastic about the piece!

JD: What is the music like? What do you enjoy most about it? Do you think it is a work that might enter the general concert repertoire now?


BK: The greatest thing about this concerto, first, is that it's a real masterpiece. It's about 30 minutes long and there wouldn't be any part that I'd like to cut out or change! Nádor himself was a violinist, but mainly he was an operetta and film-music composer. He also composed several concert works. The piece is full of post-romantic colours, with Nádor's own voice: very virtuoso, with some interesting new ideas for violinists, many inspired by the Mid-European/Hungarian styles. They say that as he finished the first movement in Munich he wanted to premiere it, but at the end he had to confess that it was too difficult for him and he wasn't able to play it! Truly the Violin Concerto is equally as difficult as any of the greatest romantic violin concertos, if not more virtuoso than some. I think if we compare the piece to violin concertos by Goldmark, Walton, Elgar and Korngold, then Nádor has the chance to be part of this - though no one has heard it, so let's wait until the world premiere and the reactions...


JD: Do you think there are many more pieces by him waiting to be rediscovered and performed?


BK: Nádor was one of the best operetta and variete compsers of the early 20th century after Lehár and Imre Kálmán, with some great compositions for some of the famous movies of the '30s in Hungary. He was a student of the Ferenc Liszt Music Academy, where I happen to teach chamber music after being a violin professor for seven years. After learning and world-premiering his great Violin Concerto I will surely look into his repertoire what else I could play (indeed, premiere) as his concerto was a wonderful, great adventure in this style for me. Not many violinsts can get to know a masterpiece in this style first in the world and bring it to a premiere in Carnegie! It's a real honour that Leon Botstein and the American Symphony Orchestra asked me to play this concert in the Carnegie Hall, where I had the chance to play a recital 60 years after another Hungarian masterpiece had been premiered there by Yehudi Menuhin, the Solo Sonata by Béla Bartók. This piece was also on my recital's program in 2004.


JD: Do you have any plans for further performances or a recording?

BK: I'm seriously thinking about both the further performances of the Nádor Violin Concerto and a recording, but first I'd like to perform the piece. I can't wait to hear the orchestration, not only from looking at the score. Hungary must take the Hungarian premiere very seriously!
Posted by Jessica at 9:38 am