In the Right Hands: A guest post about Dorothy Taubman

In this rare and special JDCMB guest post, Ilona Oltuski from New York pays tribute to the late Dorothy Taubman's work in seeking to help pianists avoid injury at their instrument.

“Life does not end with injury – you can get out of it!” Alexey Koltakov, pianist

Thanks to the late Dorothy Taubman’s essential body of work whose convincing insights convey the underlying principles of a ‘natural’ piano technique, there are no more secrets in today’s world of music to how pianists can avoid getting injured at the keyboard.

Based on physics and physiology, Taubman’s “natural” approach, which includes an understanding of all kinds of tension-related, repetitive-motion-syndrome injuries, and can be applied to other instrumentalists as well, identifies where personal limitations can be overcome by avoiding tense and restricting movements.  Her theory encourages musicians to avoid bending fingers in--or rather out--of shape, with over-exerting exercises, and detrimental, endless repetitions, of inherently wrong movements. 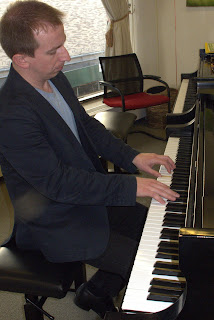 And yet, it still happens all the time!  Young musicians get caught up in intense training at their instrument without heeding serious warning signs, and as pianist Alexey Koltakov puts it, end up “taking a course towards the iceberg!”

The Ukrainian pianist felt his first symptoms of problems while partaking in the 2001 Van Cliburn competition. “I felt some sort of limitation in my right hand – compared to my left. I could not play octaves as freely, but at first it was just minimal. I was told to practice more by my teacher, Viktor Makarov, who used special training methods to build a faster technique and better endurance, and who had a good track record of other competition winners. Some years later, I was supposed to perform at the Arthur Rubinstein competition and three days before the supposed performance, I found myself unable to play any octaves at all. I had not wanted to face the fact that something was really wrong; but I could not control my right hand properly. I came to Veda (Kaplinsky) and she had a pretty good idea right there – focal dystonia – later also diagnosed by a neurologist. I had let things go too far, and the only recovery possibility was that I had to re-learn my motions for playing the piano. Where I had been curling my fingers with excessive pressure and tension before, pulling the fingers from the key, I had to consciously regain a tension-free approach. After a five-year period, I now retrieve an enormous amount of pleasure from playing the piano, again. Now I need around 3-4 hours of daily practice and I get much better results. I feel much more secure in my music making, able to express nuanced sound, in the way I choose to. My octaves are strong and there is none of the previous tension in my forearm. It’s a completely different, effortless touch,” says Koltakov, who gives testimony to the fact that Taubman’s principles, when well-applied by specialized pedagogues, can make all the difference.  Koltakov shares his experiences with other musicians freely, hoping they will avoid undergoing his hardship. He wants to get the word out that there is help available and reassure them that, “life does not end with injury – you can get out of it!” 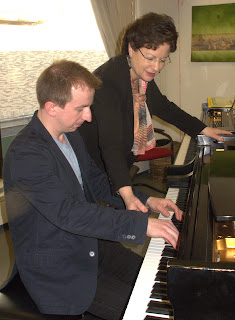 “Alexey went into denial and started to compensate, never questioning what he was taught. He had to retrain his muscles, - not unlike a stroke victim, and it took a lot of perseverance on his part and almost three years. But when I listen to him play today his hands are completely healthy, and I am moved to tears,” says Veda Kaplinsky, Chair of Juilliard’s Piano Department.

“Taubman changed my own life and put me on the course, that I am on today,” Kaplinsky continues, “Until I met her, I was under the assumption that you were either talented or not, and that there were no “technical problems”, only technical deficiencies. One had to practice blindly to overcome them and only later did I understand the importance of examining how you move and approach your physical contact with the instrument. Understanding Taubman’s approach, I was confident and able to explain to my students the reason behind it all. That made a huge difference in my ability to penetrate walls of resistance which I sometimes encounter, when introducing sometimes drastic, necessary changes. Of course, I have an average of 30 students a year and you develop your own way of imparting the information and every student needs something else. I can’t separate anymore where Taubman ends and I begin, but some of the basic principle images and expressions I use up to this day. I remember how the title, for the planned but never published book about her approach, inspired me: ‘The piano plays you,’ got me thinking: that brilliant concept of using the mechanics of the piano instead of fighting the instrument is so foreign to what I was used to, yet worked so well.  It was rebellious to many things we did intuitively, and were trained to do. It was predominantly her diagnostic ability that impressed me. She could look at a pair of hands and immediately know what’s wrong and what needs fixing.” Kaplinsky herself claims to have developed a bit of that x-ray vision, which allows her to quickly recognize the causes of pain and tension, even if the artists themselves ignore their symptoms.

“Physical discomfort prevents you from controlling the instrument in a way that enables you to express yourself musically,” she says. An artist’s physical habits at the piano become very much part of their perception of how expressive they can be. If something goes wrong, the whole essence of the musician’s well being is endangered. It’s important for people to realize that changing their injurious physical habits will not endanger their ability to express. On the contrary, freeing one’s hands enables them to explore greater possibilities and to be more consistent. Discomfort leads to loss of control and motivation to practice. But ultimately this knowledge hast to become so ingrained, like second nature. Moving correctly means removing all harshness and roughness from your sound, balance well and avoid all glitches from your finger work; in short, it is to achieve everything from pearly articulation to powerful projection,” which is, of course, a pianist’s dream come true.

In some cases, Kaplinsky will refer some of her students to Taubman specialist Edna Golandsky, who was Dorothy Taubman’s close protégé, assistant and co-lecturer for many years. Golandsky, co-founder of the Golandsky Institute, which offers its annual summer residence at Princeton-University, teaches out of her studio in New York. 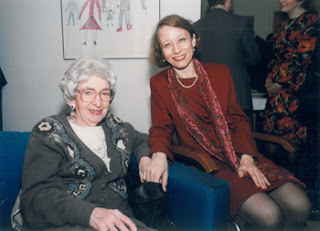 Kaplinsky, who knew Taubman before she recently passed away at the age of 95, had initially heard about her work from Golandsky, who studied with her “already 45 years ago,” says Kaplinsky, who initially was critical of what she had heard. Accompanying her college roommate in an attempt to “save her” from falling into the “cult” of Taubman, Kaplinsky changed her mind the moment she was “greeted by this very warm and sweet lady, who was not at all what I had envisioned.”  Kaplinsky says, “I remember, how the sound of my roommate at the piano changed immediately, after Taubman was touching her elbow slightly. I was in total amazement – asking her, would you listen to me too? – That’s when I started studying with her.”

Even though Kaplinsky did not publicly announce Taubman training as part of her specialty, it was always a well-known fact that she believed strongly in the Taubman principles, and integrated them into her teaching. Kaplinsky was recorded at the Piano World Conference, talking about her personal relationship with Taubman, and embracing her method.  That recording is now out of circulation, but there are a number of recordings that have been released by the Golandsky Institute that are a great starting point for familiarizing oneself with Taubman’s principles; some are also available on the Naxos library website, and are accessible through music colleges and public institutions.

What counts are true results! Alexey Koltakov performed in a concert this week at Juilliard's Morse Hall, and announced on his Facebook page: “Tonight I had my first ‘controlled’ public performance after five years of focal dystonia in my right hand!"
Congrats!