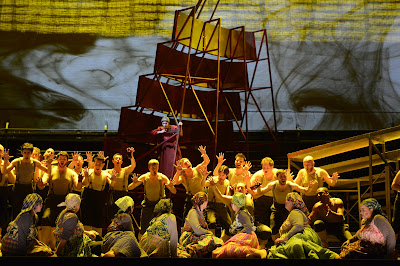 Tonight Boston Lyric Opera opens a new production of Wagner's The Flying Dutchman. Except that it isn't the opera as we know it: instead, it's an early version - the critical edition of 1841 - set in Scotland. The production is directed by Michael Cavenagh and stars Allison Oakes as Senta, Alfred Walker as the Dutchman, Gregory Frank as Donald [?? - sic] and Chad Shelton as Georg [EH? Ed. - yes, he is Georg, not Erik...] It is the US premiere of this version.

The British conductor David Angus, music director of BLO, is at the helm and I asked him a few questions about this distinctly unusual project for the Wagner bicentenary...
JD: David, please tell us something about the differences between this version of The Flying Dutchman and the one we usually hear? Are they obvious or subtle? Does it present any challenges that are significantly different? 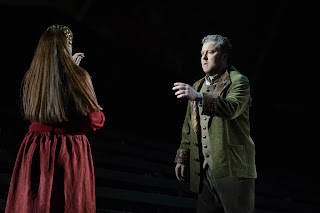 DA: The most obvious difference to the audience is the location - Scotland - and the names of the characters.  While this may seem superficial, the music actually contains many references to Scotland, with the typical bagpipe sounds of drones and little grace notes that underpin most of the chorus music, and even form the melody lines. Apparently there are even direct references to real Scottish folk songs, although I have not yet managed to trace these.  The ultimate authority on Scottish Folksong, Marjory Kennedy-Fraser makes this claim.

The point of all this is to understand that he really did write it with Scotland in mind, and so the shift to Norway is not casual and irrelevant.

The musical changes are slight in the modifications for the first performance.  He transposed down the main aria for Senta which is central to the whole piece, at the request of the soprano.  It is not easy to sing, even at the usual pitch, and up a tone, in A minor, is really tough.  However, it then makes a better contrast with the chorus that precedes it, in A major, so we are sticking to his original higher pitch.  The orchestration is hardly altered for the 1843 version, but he later made much bigger changes, in particular adding a sentimental "redemption" ending to both the overture and the final scene.  This introduced the harp, at these two points only.  The harpist sits there the rest of the evening doing nothing!  This Tristan style interruption blocks the energy of the ending in both cases and holds things up for no reason.  It has no place in the piece as he first conceived it, and we are not performing it.

For me the biggest differences are that the standard version, as produced in 1895 by Felix Weingartner, contains every added direction and modification that anybody (not just Wagner) had thought to apply to every performance in the first 50 years, and, on top of that, there has grown a tradition of further modifications, to tempo in particular.  When you see the clean original score, it contains so little in the way of directions that one hardly recognises it.  To take just one example; at the height of the development section in the overture, Senta's theme appears no fewer than four times, with just a few bars between each.  There is not a single marking to identify this.  In the later version somebody, possibly Wagner, wrote Un poco ritenuto.  What does that mean to you?  The tradition, which seems to have become so ingrained that I could not find a single recording that didn't do it (not even Roger Norrington or Bruno Weill on their "authentic" performances), is to slam on the brakes and reduce the speed as little as 1/3 of the main tempo!  Hardly un poco ritenuto!  You build up the momentum, stop in your tracks for a few bars, and then set off again at tempo for a few bars, only to screech to a stop again a few bars later - and they do this 4 times in a row.  Everybody does it!  Why?  I just don't understand.  One might argue that Wagner is quoted as saying that each musical idea has its own natural tempo, but the very same theme occurs immediately afterwards in the coda at an even higher speed, without anybody every questioning it.  We perform it without losing momentum at all, and it works much better, maintaining the forward thrust to the coda.

JD: In what ways does Wagner reflect the intended Scottish setting in the music? Did he keep any of those elements in the final, Norway-set version?

DA: He kept them all, and didn't make any reference to Norway except in the names - Donald became Daland, Georg became Erik, and Holystrand (where they shelter) became Sandvike.  There were other minor changes to the vocal lines, but nothing of any significance. 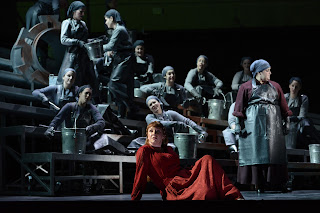 JD: How did the Scottish version come to light? What kind of editorial work had to be done to it to make it performable? What attracted you to the idea of staging it on in Boston?

My New York manager mentioned that he had a client who had performed this version in Australia many years ago, and it had been very successful.  At that time it had been uncovered by the conductor during his research, and he had produced orchestral materials himself.  I contacted him and was persuaded to follow it up, only to find that Schott had just produced a critical edition of this very version which had yet to be performed in the US.  You can imagine that, as I was already interested in it, the idea that we could actually have a US premiere of a major work by Wagner was an extremely attractive bonus.  This year there are so many Wagner performances that anything to help us stand out is very valuable.

JD: The story goes that he changed the setting to Norway after a fearsome experience at sea when his ship was forced to shelter in the fjords from a North Sea storm, but do you think there is any other reason for his decision to change the setting? 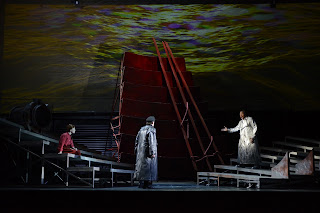 DA: There are various theories, but he had already had that experience on his journey to London and then Paris, before he wrote this piece, so it was already in his mind when he composed it; he still set it in Scotland.  I believe the reason he later changed it was that he had begun to construct the "lone creative giant" myth about himself - one of the original "spin-doctors" - and decided to make the piece more autobiographical.  Maybe he also wanted to distance himself from his sources - both the Heine original Scottish story and even his musical influences such as Marschner's Der Vampyr (set in Scotland, in which a pale man is redeemed by the death of an innocent girl!).  Wagner's original outline for the opera, set in Scotland, which he had sold to the Paris Opera when they didn't want him to compose the whole opera, had just been set by another composer, and I am sure he didn't want to be associated with that.

To sum up, Wagner wrote a strong early Romantic opera, following directly in the line of Weber (with whose music he had a great deal of direct contact when growing up in Leipzig) but which he and his followers then diluted by tinkering with it.  It has ended up as neither the Musikdrama (i.e. grand symphonic work, through-composed, and woven together with leitmotivs) that it later aspired to be, nor the much more athletic and punchy work that is was originally.  I believe strongly that the original version, shorn of all the "traditions" and modifications, is much stronger.

I have been in contact with David Breckbill, the US authority on performance tradition in Wagner, and he wrote the following which makes a very clear case:

“To perform the Holländer as though it were a later work is to expose the younger Wagner’s inexperience.  Paradoxically, in order to deserve equivalent status with its partners in the Wagner canon, Der fliegende Holländer requires performers whose temperament, spontaneity, and technique can bring out the fresh, vigorous qualities that set this opera apart from the later “music dramas”, instead of assuming that a uniform performance style based on the later works will bring the Holländer closer to them.”
(David Breckbill, Cambridge Opera Handbook)

JD: Not about Wagner, but we've all been following the Boston Marathon bomb developments and have been thinking of you over there. How is morale in the company and how is everyone feeling?

DA: Morale is now good, because the show is going very well and we are all excited to be doing our first big Wagner here.  There was a general feeling that nobody was going to let lunatics like that ruin our lives.  The bombs were awful, and caused chaos in Boston, as you will have heard.  We lost many important rehearsals, but everyone has done everything they could to catch up and we are now back on track.  We were all very shocked at the time, but I also regret that this admittedly horrifying event resulted in a worldwide media frenzy that will encourage every terrorist organisation - showing how simple it is to shut down a major US city twice in a week.  If it had happened in Syria or Iraq, it would hardly have been mentioned!