"Jonas Kaufmann is an honorary Londoner" 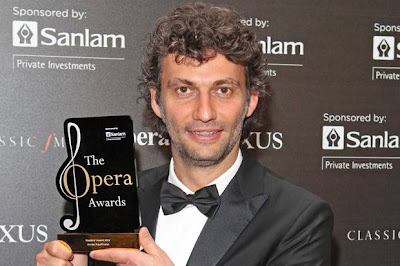 Der Jonas's love-in with London continued as he scooped two prizes at the inaugural International Opera Awards last night. Commenting in The Evening Standard, which supported the event in association with Opera Magazine, the editor Sarah Sands praised London as a magnet for international levels of excellence and - while reminding us that we need to raise our own game to be able to compete in our own capital city - pointed to Kaufmann as a prime example of the world-class talent that comes here to shine.


"Pity the English tenors up against the winning German Jonas Kaufmann," she writes. "I watched him performing Verdi and Wagner at the Royal Festival Hall on Sunday and he was perfectly at ease with both composers and all nationalities. It is voice without borders...Jonas Kaufmann is an honorary Londoner now, as far as I'm concerned."

Jonas himself, interviewed in the paper, makes straightforward and utterly pertinent remarks about why opera is for everyone. On the website, the Standard has a video of him receiving his prize.

It's a warm, warm welcome from us and, one suspects, most of the music business to the UK's first full-scale prize glitter devoted entirely to opera. The more it can be celebrated, the more people hear about Jonas, Nina, Sophie and then hear their voices, the better. And if Jonas should ever decide he does want to become a Londoner, we'd be queuing up to show him the town.
Posted by Jessica at 5:07 pm