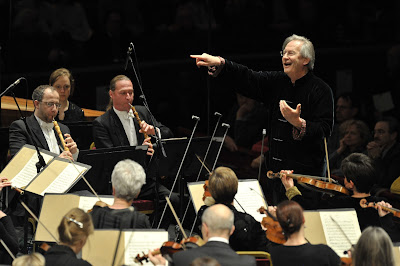 "HEY, YOU! TURN ON THE BLOODY HEATING!"

My gosh, but it was cold in the Royal Albert Hall on Monday. The Bach-loving faithful assembled for John Eliot Gardiner's nine-hour marathon (as trailed on JDCMB here) - some of us, heeding anxious tweets from the orchestra saying we should please dress warmly, realised what was going to happen and restricted our attendance to the evening.

Blasts of chill wind bowled down upon us in the stalls. A friend among the performers told us afterwards that she was wearing six layers on stage. And, most regrettable of all, the performance suffered: the English Baroque Soloists use original instruments, natch, and the delicate, valveless horn and trumpets made their opinions of the situation felt even if their players did not - tragic, because eminently avoidable. I'm informed that the day itself was better than the day before: apparently when they arrived to rehearse, the heating wasn't working at all.

What on earth is the matter with the endemic attitude in UK institutions towards people and  temperatures? I've never, ever, in any other country, seen an audience sitting through a two-hour unbroken performance (or any other performance, for that matter) in their overcoats and scarves. And we wonder why people cough? It was an absolute disgrace. I suspect the management is now being told so repeatedly by disgruntled punters who had forked out a lot of money for the privilege of freezing their butts off for nine hours. OK. RANT OVER. 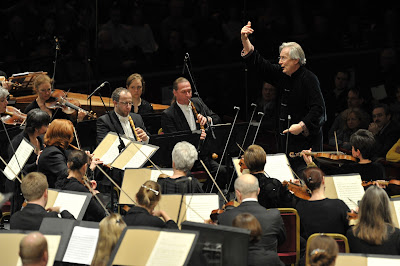 All the more credit to the Monteverdi Chorus and Orchestra and JEG for pulling off a tremendous occasion with such aplomb. The atmosphere was ecstatic, despite the cold. Promenaders in the arena (much less crowded than for the Proms proper) clustered at the front, hanging on every word and note. And when one speaker declared that though Bach has been accused of all manner of personal failings, handicaps or faults, he was actually a really good bloke, there was applause. The hall was really too large for the occasion - it was about half full, which would translate in the RFH or Barbican into queues around the block - yet it's hard to think of any other London venue in which such an atmosphere can be created. This was a Prom in all but the calendar.

The talks, led by Catherine Bott, were fascinating: the final one, featuring Howard Moody, John Butt, Raymond Tallis and JEG, focused on Bach the human being and raised questions such as whether he was as supportive to his daughters as to his sons (answer: "he was no better and no worse than anyone else"), whether he eschewed opera or was influenced by it, and whether he had any idea of just how good he really was. 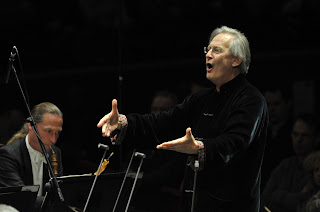 Everyone had been mesmerised by Joanna MacGregor's Goldberg Variations; there was much enthusiasm for the singalongaBachChorale for Christ Lag in Todesbanden and the way JEG led the audience rehearsal; and violinist Viktoria Mullova, cellist Alban Gerhardt and organist John Butt had all drawn many plaudits. But the B minor Mass can only have been the crowning glory.

It was a celebration of a performance, one that stirred rather than shook, but stirred greatly: if there is ever to be a procession into heaven led by angels, saints and composers, the Sanctus - stately, airy, magnificent, blazing - would surely accompany it. The strangeness and mystery of the work shone out, too: the chromatic harmonies of "Et expecto resurrectionem", hushed, legato and translucent, evoke sometimes Mozart and sometimes Wagner, and the final alto aria seemed a humanising plea of doubt and guilt before the "Dona nobis pacem". The bizarre nature of the Lutheran Bach's Catholic Mass stood out as well: soon after the belief in one Catholic thingywhatsit been proclaimed there's a chorus in which a Lutheran (or quasi-Lutheran) chorale is unmistakeably embedded, in true Bach Cantata/Chorale Prelude fashion. All the more reason to appreciate it as pure music that can speak to us all, if we allow it to.

A very different performance from Andras Schiff's at the Lucerne Easter Festival a year ago, of which I adored every minute. At Gardiner's, I missed the intimacy and collegiality of Schiff's Cappella Andrea Barca - though smaller forces would have been insane in a space as large as the RAH; also, sometimes the consistency and audibility of their more modern instruments. An oboe d'amore is a thing of beauty and a joy forever, but they were often hard to hear, being so quiet. Still, Gardiner's sheer magnificence, the sense of 'rightness' in the tempi, and the fierceness of passion that underpinned the whole interpretation, all of this was in a class of its own.

What an achievement. What a way to celebrate your 70th birthday. Someone, please give that man some champagne, the world's finest Easter egg and a good hot bath. Me, I think I'm coming down with a cold - but at least if I do, I can listen to the rest of the day on the iPlayer.