The trouble with burning the candle at both ends is that while you're out and about, you're not writing. Therefore JDCMB is a little bit late with what follows.

Leif Ove Andsnes gave the same programme twice at the Wigmore Hall last week; I attended on the second night (11 April). Not sure what's with Beethoven Op.101 this season, but this was the fourth time I've bumped into it since October; this time it joined a mixed programme including Beethoven's Op.54, Bartok's Suite Op 14, an all-too-rare rendition of Liszt's 'Pensées des morts' from the Harmonies poetiques et religieuses and Chopin's C minor Nocturne and Fourth Ballade.

Andsnes has one of the most sheerly beautiful sounds to be found on today's pianistic platforms; a super-cool customer, personable and unpretentious, he plays as if in a trance, cocooned at the piano in a world of his own. There's an almost scary perfection about him - a sole wrong note came almost as a relief, as if to say, "ah, this guy is human after all". Yet it can be flummoxing to hear the rugged Op.101 and the ferocious folksiness of the Bartok sounding as smooth as butter and the Chopin Ballade so precisely navigated that there seemed little time to "stop and smell the flowers". That exquisite moment when Chopin enters an hypnotic state of enchantment - spinning out a few bars of melody over four-against-three ripples in an aural-optical illusion - disappeared into its own notes with no time to catch the light and shine.

Nevertheless, the C minor Nocturne, its melody shaped with microscopically precise sensitivity and beauty, giving way to a mingling of chorale and octave storms that sends the cantilena into a fever of overturned emotion, was perhaps the high point of the concert. A treat and a half to hear such playing at close quarters rather than in the huge RFH. 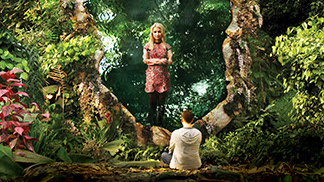 Opera in 3D? Korngold once said, when he went to Hollywood, that some day whole operas might be written for the big screen; and here it was, with knobs on; one such knob being 3D specs that can be worn over your normal specs (v useful). As a 21st-century way of conceiving a musical stage work, mingling live performance with pre-recorded film including holograms of several singers who do not appear in the flesh, but with which the on-stage singers must interact, it's a presentation that needs - and received - the slickest and cleverest of integration in performance.

Responses have ranged from "this is the future", downwards. Several concerns. First of all, this opera has much in common with many "traditional" operas in that its story is so convoluted, and the enunciation of the (amplified) singers so unclear (except for the excellent Roderick Williams) that it was next to impossible to work out what was actually going on. Themes of conscience, cot death, euthanasia, afterlife, Dr Who-like self-projections, mystical oneness with the planet (think parachuting - but why?) - all mingle in David Mitchell's imaginative yet overstuffed libretto. We enter the Sunken Garden - actually the Eden Project - through a door under a motorway and find ourselves in limbo with some lost souls and an evil, or not, mastermind, or... hmm.

While the music undoubtedly has its moments - such as some memorable effects achieved by layering repetitive snatches of film and matching soundtracks - the number one requirement for a successful opera is that the music should be the best bit; the words should provide the runway from which it can take off and fly. Perhaps Sunken Garden's chief problem is that it is so busy dazzling us with its special visual effects that the aural element begins, inadvertently, to take second place. It is all hugely inventive and ground-breaking, significant indeed for the future of opera, yet not wholly successful in its own right.

The following night, Rustem Hayroudinoff played at St John's Smith Square, in an evening that had a fraction of the audience yet twice the impact (at least for us pianophiles). Rarely do you see the entire listening assemblage jump to its feet at the final note. This one did. The Rachmaninov Piano Sonata No.1 is rarely performed - probably because it is too difficult. It's a Faust Symphony for one instrument and ten fingers, and there is more extraordinary music in a single bar of it than in certain entire evenings of...well, you get the idea. 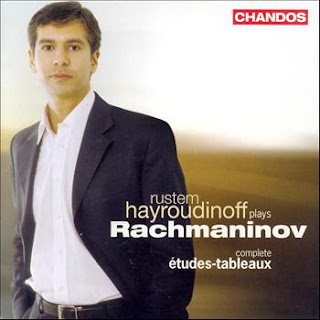 Rachmaninov weaves the work from a range of symbolic leitmotifs for different aspects of Faust, Gretchen and Mephistopheles (helpfully illustrated by Hayroudinoff in his spoken introduction). These pianistic textures would sound as complex on a 100-piece orchestra. As a feat of out-and-out virtuosity it is unremitting, indeed mind-boggling; but to deliver the wild flights of Rachmaninov's imagination with such colour, fidelity, rigour, fire and serious bedazzlement is a phenomenal achievement. Hayroudinoff's performance brought back to life the grand Chaliapin-inflected Russian style, with a depth of perspective in the voicing that was more convincingly 3D than anything we saw in that physically 3D opera.

If someone doesn't frogmarch him into a recording studio and insist that he records this gargantuan piece to add to his impressive roster of benchmark, award-shortlisted Rachmaninov discs, then those of us who were there last Saturday will simply have to throw tantrums until they do. Oh, and he also played some extremely fine Bach and Liszt - the small matter of the Second Partita and the Mephisto Waltz No.1 and more.

What price trouser-pressed perfection? What price technological novelty? All you need is one person, one instrument, music of genius and a performance infused with the fire of absolute inspiration, awareness and understanding. That is worth ten, probably a hundred, of anything else. That's what the musical experience is all about.

And with that little piece of profundity for a Sunday afternoon, I'm off to hear Jonas Kaufmann at the RFH.